It’s a shame that New Belgium’s Clips Beer and Film Tour only comes to town once a year, because this event is seriously the ultimate date night. Can you imagine someone saying “Hey, wanna ride bikes to the lake, drink some craft beers, and watch a movie while the sun sets?” Yes. Yes I do. For as long as we both shall live.

Ladies and gentleman, mark your calendars for next year because no one is turning down that kind of offer. And even better? You get to tell your date that all the proceeds from the beer sales go to supporting the Wisconsin Bike Fed – a local non-profit that devotes 100% of its time to making Wisconsin one of the world’s best places to ride a bike. So basically New Belgium Brewery and Wisconsin Bike Fed had a baby and named it Clips Beer & Film. And we all lived happily ever after in a state of bike and beer ecstasy. But really. This event is too good.

It didn’t take much to convince the Madison B-Team to help out with this event. After all, the New Belgium Fat Tire logo strongly resembles a B-cycle…no? With the help of the Wisconsin Bike Fed and many other bike-loving volunteers, we were able to valet over 600 bikes (not including the 300 parked outside the valet) for the great Madison community so they could drink their hand-crafted brews and watch some hand-crafted films while their bikes were safely tucked in for the night. Out of all New Belgium’s Clips Beer and Film Tour stops, Madison is actually the largest – with over 1200 in attendance last year and over 1800 this year. Are we surprised by this fact? Not in the slightest. Madison-ians know how to enjoy the simple things in life – like bike riding on a Thursday evening and taking in a sunset one sip at a time.

Running a bike valet is similar to running a day care. People put their trust in you to take care of their precious “child” and the initial hand-off produces some one-sided separation anxiety. You do what you can to assure parents that the bikes will play nice with each other in the racks. No rough housing allowed under the B-Team watch. Then the proud parents return at the end of the film with some hesitation and concern. Is Stella okay? Will we ever find her? “She is a red Fuji. She has two wheels. And handle bars. Please help me find her.” And then the parents clap and coo at the sight of their “child” being safely wheeled toward them. They thank you profusely for keeping “him” or “her” safe. Glad to know that I am not the only one that has assigned my bike a name and gender… 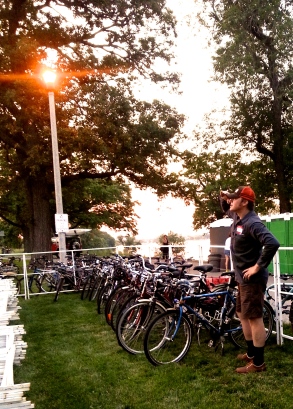 B-Team Tech spotted in his natural environment..surrounded by bikes.

Running a bike valet is not similar to running a day care because copious amounts of beer can be found on the premises.

Either way, the evening was an absolute joy to participate in and we are glad that Madison remains a stop on New Belgium’s Clips Beer and Film Tour. Already counting down the days til next year…and contemplating who to invite on this perfect date… 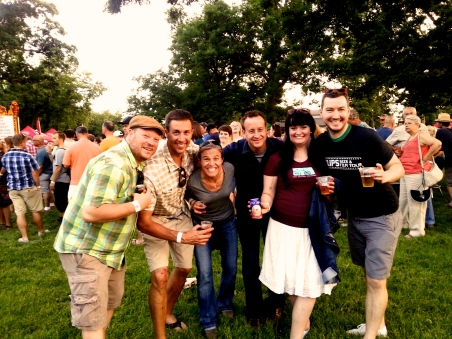 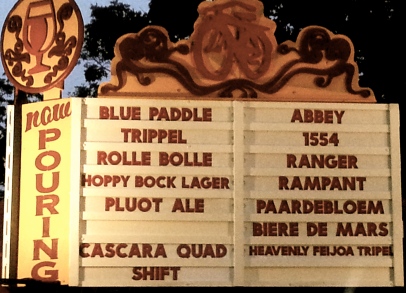